Record Net Profit Attributable to Shareholders of $6.0 Billion, Up 29% Year-On-Year

"We celebrated our ten year anniversary in Macau after achieving another half year of record financial results. Our continued success lies in consistently delivering memorable leisure and entertainment experiences to guests through our spectacular high quality resorts and our exemplary ‘World Class, Asian Heart’ service standards.

During the half year we made excellent progress in realising our primary strategic objectives across our flagship properties including enhancing our existing operations as the market evolves and building foundations for the Group’s long term sustainable growth. We are confident that Phases 2, 3 and 4 of GEG on Cotai, re-launching the Grand Waldo Complex, and our conceptual plans for Hengqin Island will enhance Macau’s world-wide reputation as a tourism capital, catalyse our earnings growth and maximise long term shareholder returns.

Reflecting the importance of our strong team and the critical role each and every member plays in our continued success, we recently extended an enhanced employee benefits package for all our 16,000 Macau general team members. These new incentive measures will help the Group to retain and attract high quality talent while maintaining the exemplary ‘World Class, Asian Heart’ service philosophy for which we are renowned.

Also, reflecting the importance we place on giving back to the community, we recently announced the establishment of the $1.3 billion GEG Charitable Foundation that will focus on educating and empowering young people in Macau and on the Mainland. I am deeply excited by this project and hope it can contribute to future stability and prosperity.

Once again, I would like to thank every one of our team members in GEG for their commitment and contributions to the Group’s success."

The Macau gaming market saw healthy growth in the half year as total gaming revenue increased by 13% year-on-year to $187.5 billion. Second quarter revenue grew at a more modest 6% year-on-year, largely as a result of more cautious spending due to a softer economy in China and the distraction of the 2014 FIFA World Cup. However, visitor numbers to Macau jumped 8% to 15.3 million, a faster rate of growth than that achieved in the same period last year. Arrivals from Mainland China now account for 67% of total visitors.

Macau’s growing appeal as a premier holiday destination with a broad array of entertainment and leisure options, was borne out by the higher margin mass segment revenue climbing an impressive 36% to $63.9 billion in the first half of 2014. This structural shift in the market will be sustained by major infrastructure improvement works such as the Guangzhou-Zhuhai Intercity Mass Rapid Transit and the Hong Kong-Zhuhai-Macau Bridge coming on stream in the near future, and increased domestic consumption on the Mainland. Additionally, the transformation of Hengqin Island into a new regional business and leisure hub, with new attractions such as the resort amusement park, will assist in attracting new visitors to the region.

The VIP segment, which accounts for 62% of the total gaming revenue, registered year-on-year growth of 3% to $116.2 billion.

Record Group revenue and earnings were achieved in the first half of the year with revenue climbing 25% year-on-year to $38.4 billion and Adjusted EBITDA surging 26% to $7.3 billion. Net profit attributable to shareholders reached an all-time high of $6.0 billion, up 29% year-on-year. The Group’s flagship properties achieved solid half year results, while the Construction Materials Division and City Clubs made solid contributions in line with management expectations. 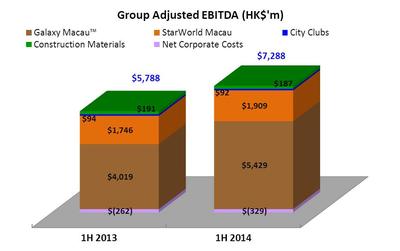 Galaxy Macau™ celebrated its third year anniversary in May 2014, and remains the key growth driver in the Group. First half revenue increased by 38% to a record $25 billion against the same period last year. Adjusted EBITDA for the same period increased by 35% to a record $5.4 billion. Adjusted EBITDA grew 27% year-on-year to $2.6 billion in the second quarter, down slightly by 5% sequentially as a result of playing unlucky in VIP and lower mass volumes.

Revenue in the mass segment was $6.4 billion, up 32% on 1H 2013. Second quarter revenue increased by 19% year-on-year to $3 billion, but dipped 9% sequentially as June and subsequently July were impacted by the FIFA World Cup.

Revenue increased by 3% year-on-year to $744 million. Hotel occupancy on a combined basis at the resort’s three luxury hotels averaged near capacity at 98% for the half year. The property’s diverse and compelling retail, dining and accommodation options continued to attract customers.

StarWorld Macau delivered solid half year results. Revenue increased by 7% year-on-year to $12.3 billion, and Adjusted EBITDA climbed 9% to $1.9 billion. These results were achieved on the back of strong growth in the mass gaming segment, and VIP revenues coming in slightly ahead of the same period last year despite significant bad luck in the second quarter.

Second quarter Adjusted EBITDA was $822 million, down 7% year-on-year due primarily to the worst VIP luck quarter in history. StarWorld Macau reported the latest twelve months ROI[3] of 109% compared to 92% for the same period last year. Adjusted EBITDA margin in the half year was constant at 15% and 25% under HKFRS and under US GAAP, respectively.

StarWorld Macau reported 12% year-on-year growth in VIP rolling chip volume to $349 billion in the first six months of 2014, which translated into revenue of $9.8 billion.

Despite enjoying a strong first quarter, demand and win softened in Q2, as weaker economic data out of China affected sentiment and spending, and the property experienced its worst quarterly luck in history with 2.5%.

StarWorld Macau’s electronic gaming generated revenue of $100 million, down 11% on last year as a result of lower hold. Second quarter net win was in line with the same quarter last year, and broadly in line with Q1 2014.

Non-gaming revenue in the period was $181 million, in line with the same period last year. Hotel room occupancy remained at near capacity throughout the period at 99%. StarWorld Macau continues to be regarded as one of Macau’s preeminent luxury hotels.

City Clubs achieved $92 million of Adjusted EBITDA in the period (1H 2013: $94 million). It continues to perform in line with management expectations.

The Construction Materials Division achieved results in line with the same period last year, delivering revenue of $1 billion and Adjusted EBITDA of $187 million.

GEG arguably has the largest and best defined short, medium and long term development pipeline in the Macau gaming market and the global gaming industry.

Reflecting the importance of our strong team and the critical role each and every member plays in our continued success, we recently extended a new employee benefits package for all our 16,000 Macau general team members. These new incentive measures will help the Group to retain and attract high quality talent while maintaining the exemplary ‘World Class, Asian Heart’ service philosophy for which we are renowned.

A special dividend of $0.70 per share was paid to shareholders on 31 July 2014. This reflects the Group’s significant cash generation ability to simultaneously develop Macau’s largest development pipeline.

Announcement of Another Special Dividend

The Group has substantial cash holdings, virtually no debt and robust cash flows from operations. The development of Galaxy Macau™ Phase 2 remains on budget and on schedule and we have great confidence in the outlook for GEG specifically and Macau in general. Therefore the Board of Directors has decided to announce another special dividend of $0.45 per share, payable on or about 31 October 2014.

In the first half of 2014, GEG set new records for revenue and earnings. However, in this period the industry has experienced headwinds such as the FIFA World Cup which occurs once every four years and the soft economic landing in China which impacted customer behaviour. GEG’s management team remains focused on executing the Group’s strategic objectives to ensure long term sustainable growth for decades to come.

GEG is very optimistic about its prospects and those of Macau. The fundamental long term drivers for growth are unchanged, with major infrastructure works and increasing domestic consumption set to drive substantial growth in visitation to Macau in the years ahead. The Group’s track record, exceptional properties, powerful brand, and clear roadmap for short, medium and long term growth, position it well to capture these new visitors and fulfill its core goal of being ‘globally recognised as Asia’s leading gaming and entertainment corporation’.

[2] ROI calculated based on the total Adjusted EBITDA for the latest twelve months divided by gross book value through 30 June 2014 including allocated land cost.

[3] ROI calculated based on the total Adjusted EBITDA for the latest twelve months divided by gross book value through 30 June 2014 including allocated land cost.

Galaxy Entertainment Group Limited ("GEG") is one of Asia’s leading gaming and entertainment corporations, and is a member of the Hang Seng Index.

GEG primarily develops and operates hotels, gaming and integrated resort facilities in Macau, the only legal gaming location in China and the largest gaming entertainment market in the world.

The two flagship properties of GEG include Galaxy Macau™, a world class integrated destination resort opened in May 2011 at Cotai, and StarWorld Macau, an award-winning property opened in 2006 on the Macau peninsula.

In April 2012, GEG announced the development of Galaxy Macau™ Phase 2 that will nearly double the size of the existing resort to one million square metres. Upon its targeted completion by mid-2015, Galaxy Macau™ Phase 2 will bring to Macau some of the most exciting entertainment, leisure, retail and MICE facilities. In December 2012, GEG outlined its concept plans for Phases 3 & 4 of its Cotai landbank and expects to commence site investigation works as early as late 2014.

Recently GEG entered into a framework agreement with the Hengqin Island authority to develop a 2.7 square kilometre land parcel for a world class destination resort in Hengqin Island. This project will complement GEG’s business in Macau and differentiate us from our peers, as well as play a key role in supporting Macau to become a world centre of tourism and leisure.

Cambodia To Extract Gold in Rattanakiri and Mondulkiri Soon