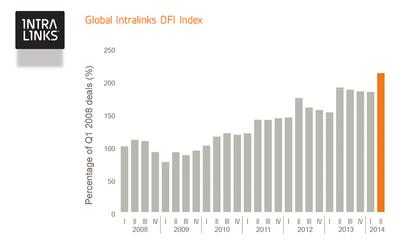 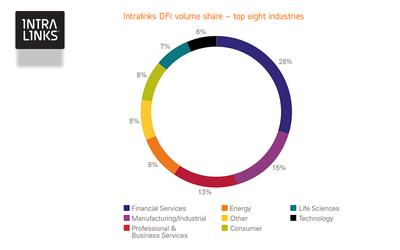 The results were published as part of the Intralinks Global Sentiment Survey, a poll of more than 1,000 M&A professionals worldwide conducted in June 2014 that gauges dealmakers sentiments and views on the current state of the M&A market. Respondents said they believe deal valuation represents a greater challenge to the deal process than other factors such as shareholder activism against underperforming companies, or political interference.

The survey also revealed that on a global level, 67 per cent of dealmakers indicated they are optimistic about the current deal environment in comparison to the previous six months, while for APAC in particular a slightly lower 65 per cent of dealmakers claimed they are positive about the current deal landscape. Interestingly, the Intralinks Global Sentiment Survey also uncovered that 80 per cent of dealmakers in APAC predict that deal volume will increase over the next six months (compared with 77 per cent globally), and 68 per cent said they do not expect a change in political interference in M&A activity over the next 12 months.

“The global M&A market is continuing to exhibit higher levels of activity than in 2013, maintaining optimism among dealmakers,” added Mr. Porzio.

The Intralinks DFI forecasts changes in the volume of global M&A deals that are expected to be announced in the next six months. The latest data, compiled through the end of June 2014, shows 16 per cent quarter-on-quarter (QoQ) and 12 per cent year-on-year (YoY) increases in early-stage global M&A activity, with particularly strong performances in Europe, Middle East and Africa (EMEA) and North America.

Overall, this quarter’s results point to sustained momentum in M&A activity through the end of 2014, building on the strong levels of M&A activity seen in the last year. Based on the results of the Intralinks DFI so far this year and its strong correlation to the volume of future announced deals, Intralinks is predicting that global announced M&A volumes for 2014 as a whole will, for the first time since 2010, show an annual increase of between six and 10 per cent compared to 2013.

Deal activity levels in the APAC region however remain volatile, down 15 per cent YoY and QoQ. While Japan is quite strong, China, one of the largest investors in the region, continues its economic realignment which is decelerating overseas acquisitions, and is having a notable affect in Australia and beyond.

“A good lending environment with high quality assets and companies for sale are driving this growth. Deal volume continues to go up and we expect to see a good number of high profile deal announcements through the end of 2014, especially in sectors like manufacturing and telecommunications, media and entertainment,” said Mr. Porzio.

North America
The level of North American early-stage M&A activity grew 17 percent YoY, sustaining the momentum in this market from 2013. Deal volume was up 22 percent QoQ, reflecting some seasonal variation, and the fact that some companies worked to complete deals while interest rates remain low and confidence in an economic recovery in the United States continues to increase.

EMEA
Europe continues to perform very strongly and consistently, with a 17 percent YoY increase, paired with a 17 percent increase QoQ. Even countries that were written off recently as poor environments for investments, such as Spain, Portugal and France, are making a comeback. Germany continues to be especially strong and is seen as a safe haven for investments. For the last four quarters EMEA has shown strong performance, and we anticipate this will continue through 2014.

Latin America remains weaker than North America and EMEA, but is poised for growth. Although early stage M&A activity was down seven percent YoY, there was a healthy increase of 20 per cent QoQ. This surge was led by Brazil, which alone saw a 26 per cent increase QoQ, which we expect will be reflected in deal announcements later this year. Contrary to these findings, however, Intralinks’ Global Sentiment Survey showed that dealmakers in Latin America continue to express reduced optimism about prospects for the region, including for Brazil, for the remainder of 2014.

For more information about the Intralinks DFI, please visit http://www.intralinks.com/knowledge/intralinks-deal-flow-indicator.

About the Intralinks Deal Flow Indicator
The Intralinks Deal Flow Indicator provides Intralinks’ perspective on the level of M&A due diligence activity taking place during any given period of time. The statistics contained in the Intralinks DFI represent the volume of VDRs opened, or proposed to be opened, through Intralinks or other providers for the purpose of conducting due diligence on proposed transactions including asset sales, divestitures, private placements, financings, capital raises, joint ventures and partnerships. These statistics are not adjusted for changes in Intralinks’ share of the VDR market or changes in market demand for VDR services. These statistics may not correlate to the volume of completed transactions that may be reported by market data providers and should not be construed to represent the volume of transactions that will ultimately be consummated during any period of time. Indications of future completed deal activity derived from the DFI are based on assumed rates of deals going from due diligence stage to completion. In addition, the statistics provided by market data providers may be compiled with a different set of transaction types than those set forth above.