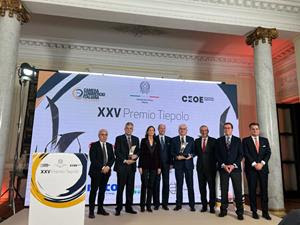 MADRID, Spain, Dec. 13, 2022 (GLOBE NEWSWIRE) — Yesterday evening Luigi Ferraris, CEO of Ferrovie dello Stato Italiane (FS Group), and José Bogas Galvez, CEO of Endesa, received the 2022 Tiepolo Award. Since 1996, this award has been celebrating the achievements of successful Spanish and Italian entrepreneurs and their important contribution to the strengthening of economic and trade relations between the two countries. The award was presented to the CEOs by the Spanish Minister of Industry, Commerce and Tourism, Reyes Maroto, at the Amboage Palace, headquarters of Italy’s diplomatic representation in Madrid. Ferraris and Bogas “are two well-known executives, one Italian and the other Spanish, whose companies are leaders in two strategic sectors of the economy and strongly aim at decarbonization; two sectors in which the activities of these two companies are obviously very close to people’s needs, contributing to the wellbeing of the society in which we live,” said the Italian Ambassador in Madrid, Riccardo Guariglia, in his opening speech at the award ceremony. The Tiepolo Award is granted by the Italian Chamber of Commerce and Industry for Spain (CCIS) and the Confederación Española de las Organizaciones Empresariales (CEOE), under the auspices of the Embassy of Italy in Spain; the president of Assocamerestero, Mario Pozza, and the presidents of CCIS, Marco Pizzi, and CEOE, Antonio Garamendi also attended the ceremony. Now in its 25th edition, the award was sponsored by Brembo, FS Group, Generali, Italfarmaco, Endesa, Iveco, Mediaset Spain, Negrini, Unidad Editorial, Intesa Sanpaolo and Iryo. Over the years it has been awarded to well-known public figures such as Francesco Starace, Giovanni Agnelli, Cesare Romiti, Pietro Salini, Marco Tronchetti Provera and Mario Monti.

“I would like to share this prestigious award with the entire team of the FS Group and with the more than 82,000 employees working in Italy and in its subsidiaries abroad. In particular, with the colleagues working here in Spain, who in these very weeks are busy with the debut of our Frecciarossa 1000 on the tracks of the Spanish high-speed rail network,” “the latest step in a strategy that sees the FS Group increasingly active in an integrated European railway market that is open to competition,” said Ferraris, in his speech from the stage after receiving the award. “Our goal is to share the experience gained in the Italian high-speed market, making it available to Spain and Europe in order to replicate the positive results and successful models achieved in Italy,” he added. Ferraris has been the CEO of Ferrovie dello Stato Italiane, Italy’s largest infrastructure group and a leader in passenger and freight rail transport, since June 2021. Through its operator Trenitalia, the Group is part of the Iryo consortium, the first private high-speed company in Spain, which launched its first commercial service in the country on the Madrid-Barcelona line on November 25 and will soon start operating from the Spanish capital to Cuenca and Valencia, on December 16.

“Receiving the Tiepolo Award is for me an honour and a privilege for which I am deeply and sincerely grateful,” Bogas said in his speech, highlighting his “deep professional and personal bond with Italy; I can say that I have made good Italian friends over the last two decades.” “Today, belonging to a global business group is a huge privilege,” stressed the CEO of Endesa; “it gives us the opportunity to see the world from different perspectives. Each country has its own projects and each culture its own virtues. That is why I have always experienced the Endesa-Enel partnership as a constant exchange of value in both directions, which makes us undeniably better.” José Damián Bogas Gálvez has been the CEO of Endesa SA, a leading company in the Spanish electricity sector and the second largest electricity market operator in Portugal, since 2014. He is also Country Manager for Spain of the Enel Group, the Italian energy multinational to which Endesa belongs, and President of Enel Green Power Spain, which deals with renewable energy generation and is one of the main players in the renewable energy sector worldwide. Under Bogas’ leadership, the company has been playing a key role in the technological transformation of the energy sector and the transition to clean energy, focusing on renewables in the ambitious goal – shared with its Italian parent company Enel – of achieving complete decarbonisation of its activities by 2040.

The Tiepolo Award “is an example of the close economic relations” between Spain and Italy, said Spanish Industry Minister Reyes Maroto, stressing that the NRRP could be an opportunity to increase collaboration between Madrid and Rome. The Minister also noted that, so far, the winners of the Tiepolo Award have all been men and therefore called on the jury not to forget female leadership and to recognise female entrepreneurs in the two countries. 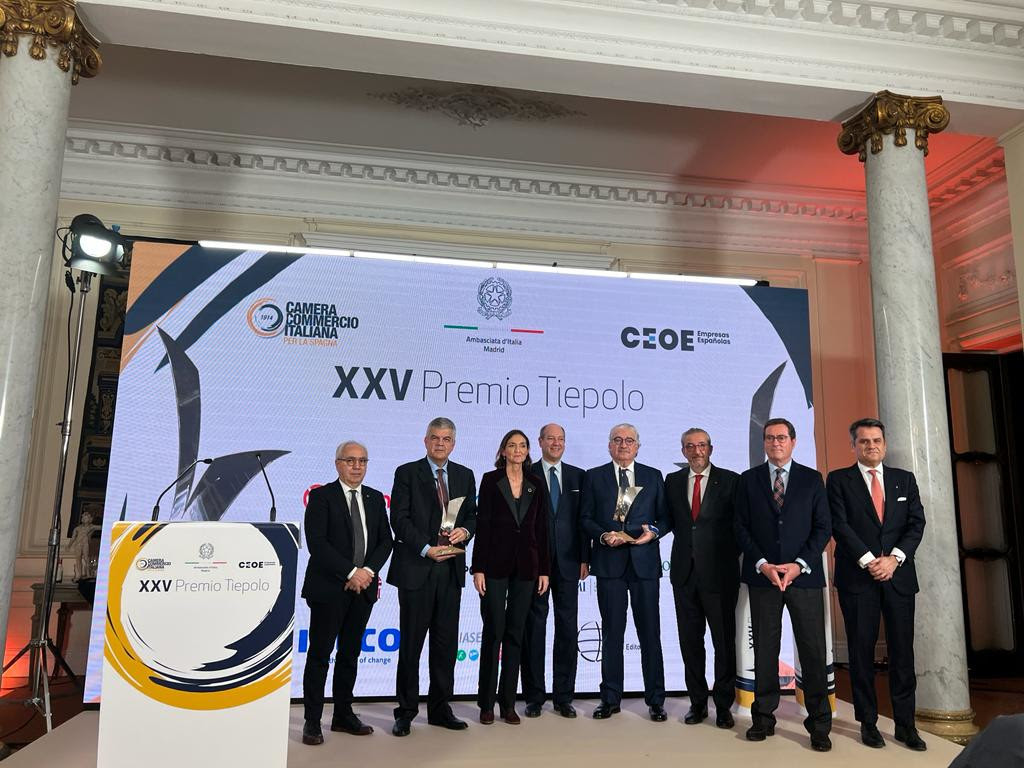 A photo accompanying this announcement is available at https://www.globenewswire.com/NewsRoom/AttachmentNg/cd7e8def-0cd5-4ce0-a219-175b60d67054

The photo is also available at Newscom, www.newscom.com, and via AP PhotoExpress.