Following the 2012 ASEAN Summit in Phnom Penh, the chair, Cambodia, was largely blamed for the ASEAN foreign ministers’ failure to produce a joint communiqué over the South China Sea dispute. 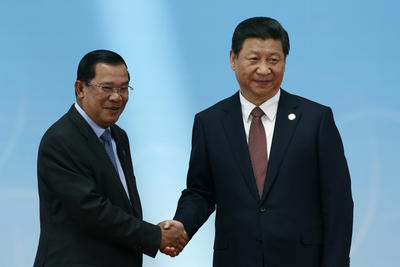 The sticking point was that the ASEAN claimant states — particularly the Philippines and Vietnam — insisted on using strong language to criticise China’s growing assertiveness. Manila wished to incorporate the Scarborough Shoal, claimed by China and the Philippines, in the communiqué. And Hanoi wanted the document to express criticism of Beijing’s growing provocation at sea. For Vietnam, one example of this was the cutting of a Vietnamese oil exploration cable by Chinese fishing vessels in May 2011. Another was China unilaterally granting nine oil blocks in disputed areas to foreign firms in June 2012.

But the proposals to include these respective concerns of the Philippines and Vietnam were rejected by Cambodia. Phnom Penh viewed these as bilateral rather than multilateral issues. The chair’s continuous refusal to assent to including criticism of China led to the accusation that the country had completely ignored the interests of the region as a whole in favour of its own national interest. To put it even more bluntly, some saw Cambodia as a proxy for China, ardently advancing its patron state’s interests.

Is this claim justified?

One of the reasons Cambodia sought to join ASEAN was to gain protection from its neighbours Thailand and Vietnam. These larger neighbours have throughout history worried Cambodian leaders, including the late King Ang Duong, the late King Norodom Sihanouk, General Lon Nol, Pol Pot, and even Prime Minister Hun Sen. General Lon Nol and Pol Pot chose strong external allies (the US and China, respectively) to counter the threat from its neighbours. On the other hand, Hun Sen has chosen a more nuanced foreign policy approach by hedging against both China and ASEAN, particularly Vietnam.

Since Cambodia was admitted into ASEAN in 1999, its strategy has been partly driven by an expectation that ASEAN would act as a counter against Cambodia’s neighbours. But the country was disappointed by ASEAN’s muted response to the armed conflicts between Cambodia and Thailand surrounding the Preah Vihear temple. When Phnom Penh called for ASEAN support in 2008–10, ASEAN countries — particularly the Philippines and Vietnam — showed little interest, even though their indifference went against the main regional principle of ASEAN; that is, the prevention of armed conflicts and disputes between member states.

The reaction of Manila and Hanoi towards Phnom Penh’s request for ASEAN intervention is worth analysing. The Philippines initially seemed as if it would take a bold stance. Manila accused the Thai government of attempting to avoid the agreements it had reached with Cambodia, but thereafter Manila claimed its position had been misrepresented by the media. Meanwhile, a Vietnamese spokesperson made a formal statement that the Vietnamese government expected both Cambodia and Thailand to resolve the conflict peacefully and amicably, a statement Cambodia was not expecting. Hanoi may have reckoned that an interventionist stance as per Cambodia’s request would harm its economic interests in Thailand.

Sensing that ASEAN had not taken the security interests of its smaller members seriously, Phnom Penh started losing faith in the association — seeking to attract the attention of the other ASEAN states by defying Vietnam and the Philippines on the South China Sea issue at the 2012 ASEAN Summit. But this does not necessarily mean that Cambodia decided to completely abandon the ASEAN countries and opt for China. In fact, Cambodia recognises that ASEAN, and especially Thailand and Vietnam, is vital to its interests. These interests, furthermore, are best served by maintaining a balance between China and ASEAN countries.

If Cambodia were a Chinese proxy, such a balance would be unnecessary: Cambodia’s strategic security would be totally underwritten by its patron, China. Phnom Penh would be unable to maintain close relations with other countries, especially China’s enemies and competitors.

But the Cambodia–Vietnam relationship remains strong, as Prime Minister Hun Sen’s recent visit to Hanoi showed. In December 2013, he visited Vietnam amid rising tensions in Cambodia after accusations of irregularities in the national election held earlier that year. Despite his party’s declining popularity, partly due to Cambodia’s close relations with Vietnam, Hun Sen still managed to visit to Hanoi and meet senior political leaders. More surprisingly, he publicly spoke in the Vietnamese language to create a sense of amity and indicate his willingness to draw closer to Vietnam.

The position of the Cambodia National Rescue Party (CNRP), the largest opposition party in Cambodia, towards Hanoi is also interesting. The CNRP, notorious for its hostile policy towards Vietnam, has recently promised to grant Cambodian citizenship to Vietnamese immigrants born in Cambodia if it wins the national election.

Maintaining a balance between China and ASEAN will likely remain the cornerstone of Cambodian foreign policy. Without such a balance, Cambodia risks being cursed by its geography.

Phnom Penh cannot afford to be a Chinese proxy. While China is of great economic interest to Cambodia, Vietnam is also vital to Cambodian security given the country’s geographical proximity. Balancing its foreign policy between China and Vietnam (and ASEAN as a whole) would be the wisest option for Cambodia. At the same time, the fiasco of the 2012 ASEAN summit should demonstrate to other ASEAN members the necessity of responding to the security concerns of its smaller members.

Leng Thearith is a PhD candidate in Political and International Studies at the University of New South Wales at the Australian Defense Force Academy (ADFA).

The author would like to express his sincere gratitude to Professor Leszek Buszynski, currently a Fellow Researcher at the Hedley Bull Center, for his valuable advice and comments on the article.