On February 2, Counselor Tom Shannon and Senior Advisor to the Secretary Ambassador David Thorne led a U.S. delegation to the Extraordinary Meeting of the Friends of the Lower Mekong in Pakse, Laos. The Friends of the Lower Mekong, a donor coordination group, came together with the countries of the Lower Mekong to discuss the connection between water resources, energy needs and food security. Accompanying Counselor Shannon and Ambassador Thorne were representatives from the U.S. Army Corps of Engineers, U.S. Agency for International Development (USAID), Environmental Protection Agency, and the Department of Energy.

The health of the Mekong River is essential to the economic growth and sustainable development of the region. In Cambodia, the Mekong supports the rich biodiversity of a watershed that provides more than 60% of the protein intake for the entire country. The river irrigates the “rice bowl” in Vietnam, where more than half of the nation’s rice production is concentrated in the provinces that make up the Mekong delta. In Laos, Thailand, and Burma, the Mekong is an important artery for transportation, a water source for aquaculture and agriculture, and a generator of electricity.

Meeting participants discussed the challenges of ensuring a future in which economic growth does not come at the expense of clean air, clean water and healthy ecosystems. The meeting brought together senior officials from Laos, Burma, Cambodia, Thailand, and Vietnam alongside representatives from the United States, the Mekong River Commission, the Asian Development Bank, the World Bank, the European Union, and the governments of Australia, Denmark, Finland, Germany, Japan, Korea, the Netherlands, and Sweden.

At the meeting, the U.S. delegation announced several new initiatives, including the launch of USAID’s Sustainable Mekong Energy Initiative (SMEI). Through the SMEI, the United Stateswill promote the use of alternative energy and low-emission technologies. The delegation also announced that the Department of State will organize and send a Sustainable Energy Business Delegation to the region later this year.

The U.S. Army Corps of Engineers announced that it will provide technical assistance on hydropower management. In conjunction, Counselor Shannon and Ambassador Thorne announced that the State Department will contribute $500,000 in support of a Mekong River study on the impacts of hydropower on the community and environment.

The Friends of the Lower Mekong will also work together to strengthen the capacity of Lower Mekong countries to more effectively implement social and environmental safeguards such as environmental impact assessments and strategic environmental analyses. The U.S. government, Asian Development Bank, World Bank, Japanese International Cooperation Agency and the Government of Australia plan to jointly develop a Regional Impact Assessment Training Center at the Asian Institute of Technology Center in Vietnam.

Under the auspices of the Lower Mekong Initiative the United States is continuing successful projects like Smart Infrastructure for the Mekong (SIM) to provide technical assistance to the region on land and water use management, renewable energy, and infrastructure development. $1.5 million will be spent on SIM projects in the Mekong region this year. 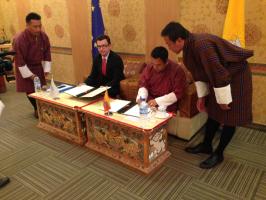 EIB and Bhutan sign a Framework Agreement for capital investments

On Thursday 4 December, the European Investment Bank (EIB), the European Union’s long-term financing institution and Kingdom of Bhutan signed a Framework Agreement under which the Bank can start financing capital investments in the country.

The agreement was signed by the EIB Vice-President with special responsibility for the Bank’s activities in Asia, Román Escolano and his Excellency Lyonpo Namgay Dorji, Finance Minister of the Royal Government of Bhutan in Thimphu, capital of Bhutan.

The EIB is the long-term lending institution of the European Union and its shareholders are the EU Member States. Its remit is to make long-term finance available for viable projects in order to contribute towards EU policy objectives. Outside the EU, the Bank support projects that contribute to economic development in countries that have signed association or cooperation agreements with the EU or its Member States.

The signing of the Framework Agreement represents the first step of the EIB to support development projects in Bhutan. EIB is cooperating closely with the European Commission and the EEAS, in support of the EU’s policy objectives in the country. In pursuing sustainable investments in Bhutan, the Kingdom of Bhutan and EIB already discussed potential projects in the country, namely in the areas of energy and water infrastructure.

The EIB has been active in Asia since 1993 under mandates granted by the EU Council and the European Parliament. During this period the EU bank has signed contracts in the region for a total of EUR 5.6 billion. On 1 July 2014 the EU’s new External Lending Mandate, covering the period 2014-2020, entered into force. Part of the current mandate is dedicated to Asia, enabling the EIB to finance operations that contribute to climate change mitigation and adaptation or the development of sustainable economic infrastructure. Additionally, the EIB can also draw on its own resources under the Climate Action and Environment Facility or the Strategic Projects Facility to finance relevant projects on a selective basis.